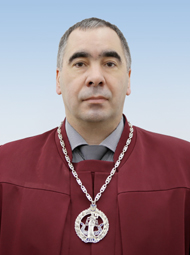 Judge of the Constitutional Court of Ukraine

On February 27, 2018, he was appointed judge of the Constitutional Court of Ukraine by a Decree of the President of Ukraine, following the results of the competition. Vasyl Lemak swore the oath on March 2, 2018.

Doctor of Law, Professor, Corresponding Member of the National Academy of Legal Sciences of Ukraine.

Areas of scientific research are the theory of law, the problems of constitutionalism and legal reform in Ukraine and Central European states. Vasyl Lemak is an author and a co-author of more than 180 research and methodological works, among them: "The Constitution of Ukraine: Scientific and Practical Commentaries" (2011), "The legal system of Ukraine past, present, and future: in 5 vol.", vol. 1 (2013), "Ukrainian Legal Doctrine: in 5 vol.", vol. 1 (2015), "State-legal reform in Czechoslovakia under conditions of post-socialist modernisation and division of the federation" (2002), "The legal system of Ukraine: history, state and prospects: in 5 vol.", vol. 1 (2008), "Lustration legislation and practice: experience of Czech Republic" (Yearbook of Ukrainian law, Coll.of scientific papers, 2015, No. 7); "Technology of constitutional reform: the main requirements of European experience for Ukraine" (Law of Ukraine, 2016, No. 6); "Constitutional complaint: the experience of Central European states and possible lessons for Ukraine" (Public Law, 2016, No. 4); "Constitutional complaint in Ukraine: problems of the mechanism of implementation" (Bulletin of the National Academy of Legal Sciences of Ukraine, 2017, No. 2); "The Great Ukrainian Law Encyclopedia: in 20 vol., vol. 1: History of the State and Law of Ukraine; vol. 2: The Philosophy of Law; vol. 3: General Theory of Law" (2016 - 2017).

Vasyl Lemak has participated in drafting a number of laws of Ukraine, in particular, he was a member of the working group of the Council on Judicial Reform of Ukraine, he also developed the draft law "On the Constitutional Court of Ukraine" (2016).

Awarded with the Diploma of the Verkhovna Rada of Ukraine.