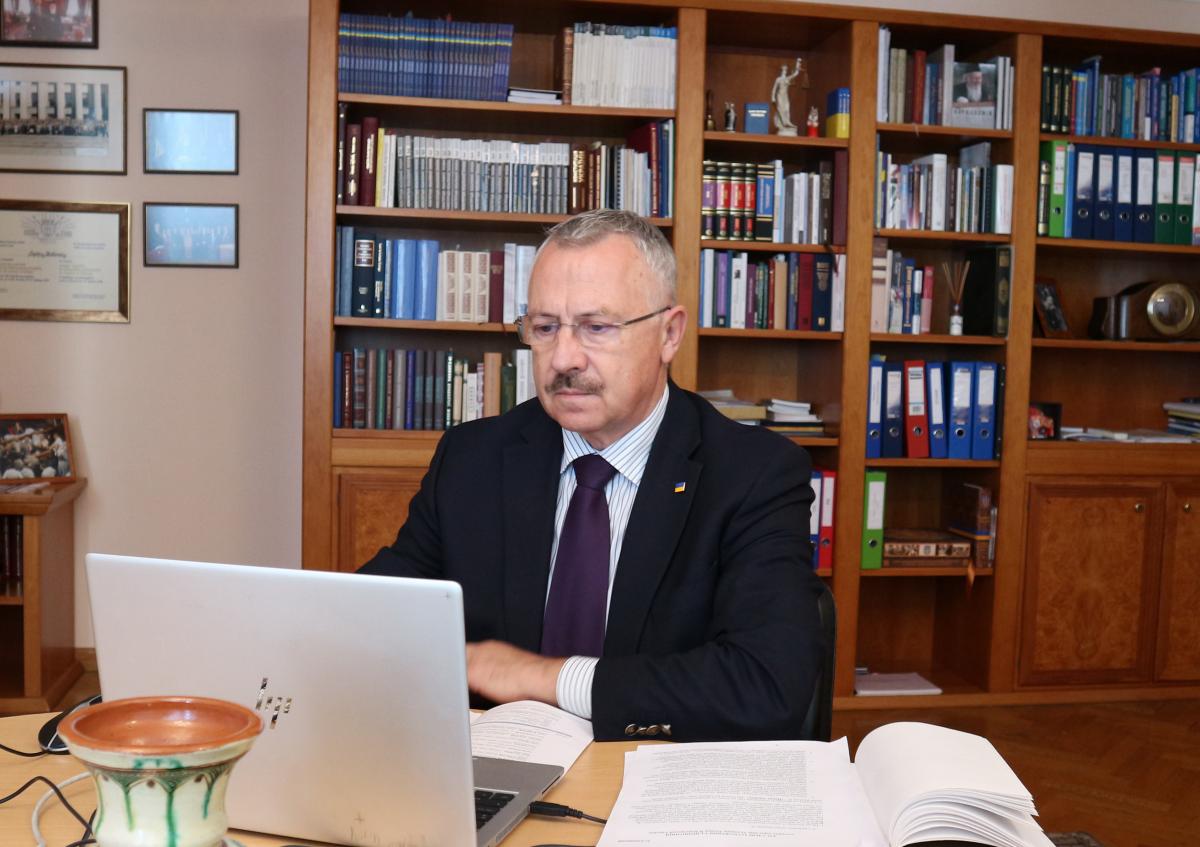 Serhiy Holovaty, Deputy Chairman of the Constitutional Court of Ukraine, addressed the participants of the international forum with a welcoming speech, emphasizing that the subject matter of discussion is extremely important and relevant.

According to the judge, Ukraine has been undergoing social transformations since the declaration of its independence. Deputy Chairman reminded that Ukraine recently celebrated the 30th anniversary of the independence of the Ukrainian state, which has chosen the orientation of its development in the direction of Western civilization and Western values, first of all - respect for human dignity and human rights.

In his report, Serhiy Holovaty noted that today Ukraine is gradually overcoming the lack of knowledge and experience in state-building, in affirming the ideals of Western values, because, as the judge stressed, the Soviet system did not provide knowledge about human rights, liberal democracy or rule of law principle. Mr. Holovaty noted that coming into the world, human already has dignity, because it is inherent in him or her by Nature. "Human has innate rights that no one can alienate," he said.

In conclusion, the Deputy Chairman of the Constitutional Court of Ukraine wished the participants a fruitful discussion and in-depth understanding of the forum.

The OSCE Project Co-ordinator in Ukraine, Ambassador Henrik Villadsen, congratulated the Constitutional Court of Ukraine on its 25th anniversary. In his speech, he noted that the rule of law and human rights are universal principles worthy of daily conscientious struggle. 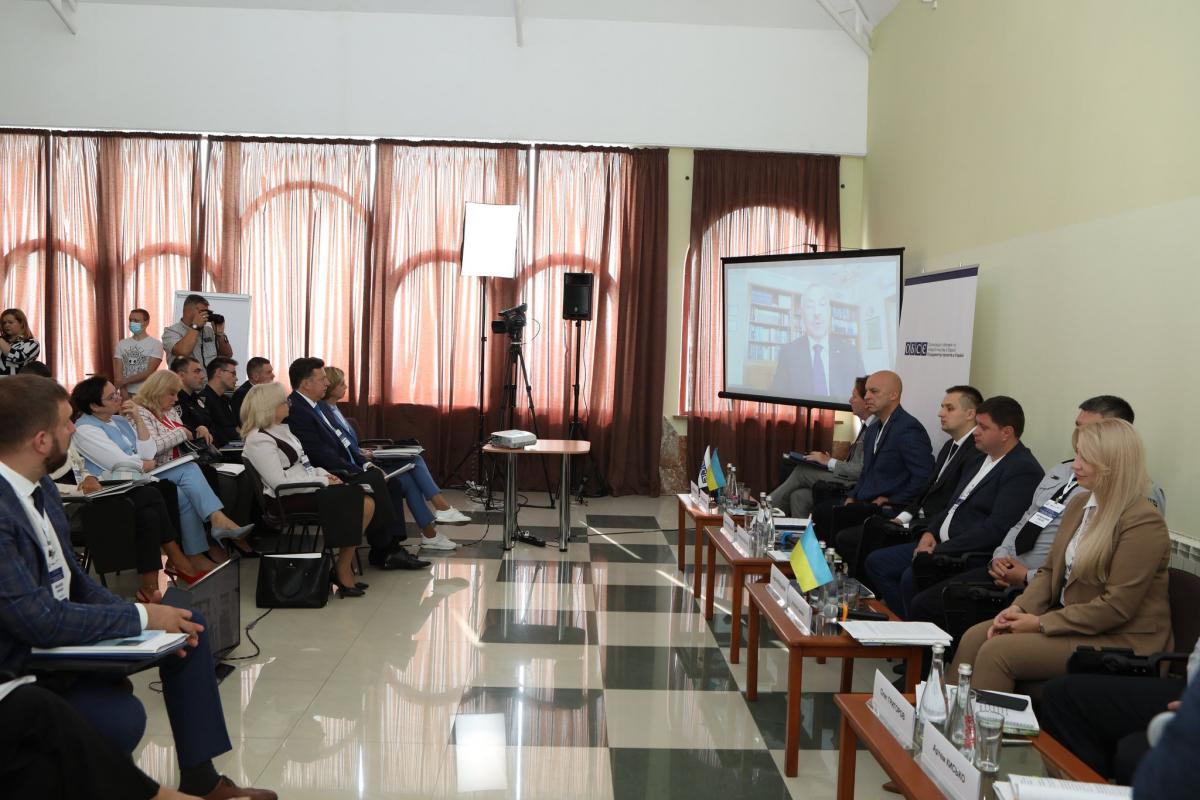 Mr. Villadsen noted that the venue of the First Constitutional Forum - the city of Mariupol - was chosen not by chance: this city is an outpost bordering the areas where the Russian-Ukrainian armed conflict is currently taking place, therefore, it is significant to hold an event aimed at strengthening the constitutional order of Ukraine and upholding the rights and freedoms of human and citizen, in this city.

The OSCE Project Co-ordinator in Ukraine also shared the view that the constitutional order is not ideal in any country in the world, but it is a time-tested form of social contract, and the strength of the social contract in Ukraine is the main goal of the OSCE in Ukraine.

The introductory speech was also made by the Deputy Head of the Donetsk Regional State Administration Vadym Filashkin and the Secretary of the Mariupol City Council Kseniia Sukhova.

The first panel "Constitutional Principle of Equality: Gender Dimension" began with a speech delivered by the judge of the Constitutional Court of Ukraine Galyna Yurovska.

She noted that the gender equality is not about women but about human rights, equal opportunities and means for their implementation.

Judge Yurovska pointed out that as to their content laws have to be permeated with the ideas of social justice, freedom and equality and the state has to protect the mechanisms of implementation of equal opportunities. At the same time, as regards gender equality it is not that women have to be granted the rights of men but on the contrary that men and women have to be granted possibility to freely choose their social role in the society.

"The Constitutional Court of Ukraine, based on the scientific and legal doctrine of constitutional law, the provisions of the Constitution of Ukraine and international obligations, introduces constitutional values in various spheres of public relations, promotes gender equality as part of the general principle of equality," said Galyna Yurovska. 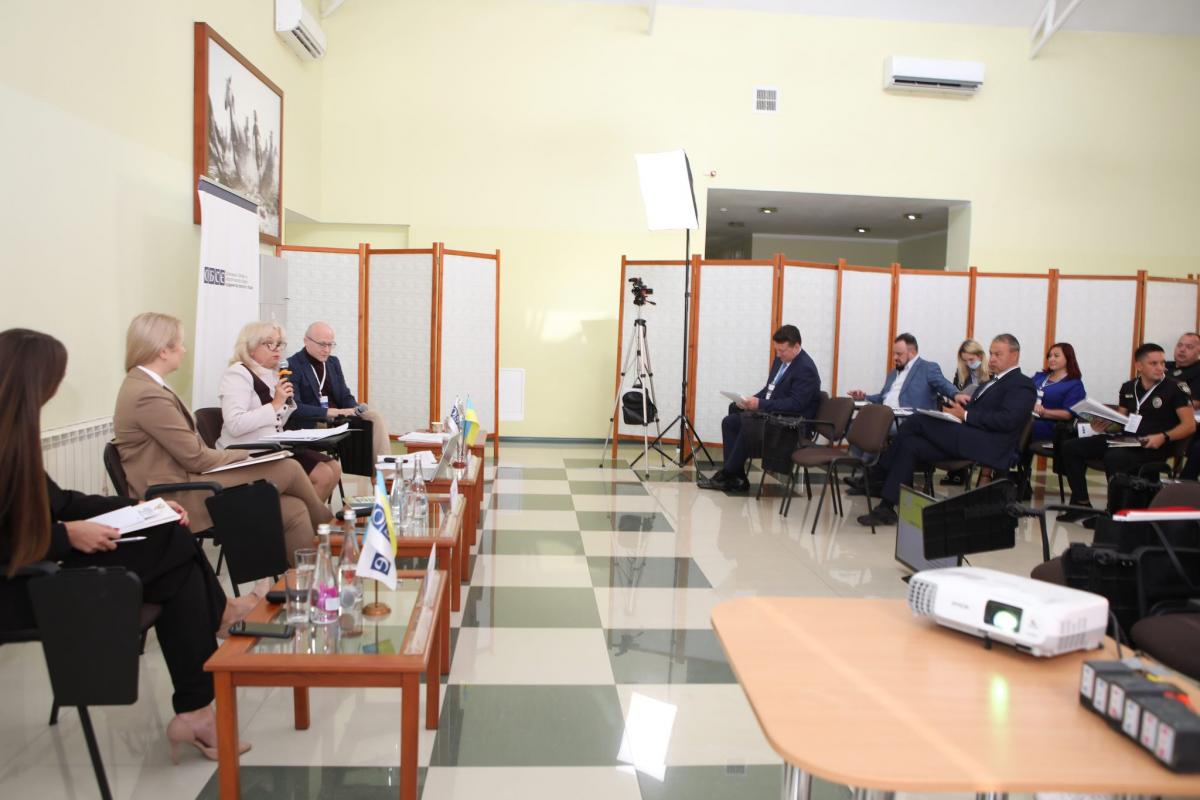 In his speech, Oleksandr Vodyannikov, National Legal Adviser to the OSCE Project Co-ordinator in Ukraine, outlined issues such as gender analysis, gender dimensions of the Constitution, equality theory, and the methodological apparatus of gender equality analysis. He cited examples of the jurisprudence of foreign constitutional bodies, which used gender analysis exclusively to address many issues, including local self-government.

Reports were also made by Professor of the Department of Constitutional Law of Ivan Franko National University of Lviv, Doctor of Law, Associate Professor Olena Boryslavska, Associate Professor of the Department of Criminal Law of the Yaroslav Mudryi National Law University, Candidate of Law Olena Kharytonova, Secretary of Mariupol City Council Kseniia Sukhova and Assistant Rector for Gender Affairs at Donetsk State University of Internal Affairs Olha Svitlychna. Above speakers analyzed aspects of gender dimension, equality theory. At the same time, they talked about the legislative regulation of gender equality, areas of work on gender issues of higher education institutions, as well as gave examples of gender balance in some public authorities, etc.

The issue of protection of constitutional rights in modern conditions was discussed during the second panel of the forum.

Judge of the Constitutional Court of Ukraine, Doctor of Law, Professor, Corresponding Member of the National Academy of Legal Sciences of Ukraine Viktor Horodovenko presented a report on "Constitutional proceedings as a means of legal protection of rights and freedoms."

Viktor Horodovenko also analyzed the means of legal protection of human rights and freedoms, the implementation of which is carried out both in a direct form - of a constitutional complaint, and indirectly - it is a constitutional petition, appeal.

Speeches were also delivered by the Chief Researcher of the Research Laboratory of Public Safety of Communities of Donetsk State University of Internal Affairs, Full Member of the National Academy of Legal Sciences of Ukraine Antonina Bobkova; Associate Professor of the Department of Advocacy of the Yaroslav Mudryi National Law University, Disciplinary Commissioner of the Association of Private Performers of Ukraine Olena Ovcharenko; Head of the Analytical and Legal Department of the Secretariat of the Supreme Court Rasim Babanly; Senior Inspector for Special Assignments of the Human Rights Department of the National Police of Ukraine Serhiy Sydorov, and Deputy Head of the Preliminary Opinions Division of the Legal Directorate of the Secretariat of the Constitutional Court of Ukraine Oleksandra Spinchevska.

The speakers focused on the problematic issues of implementation of certain provisions of national legislation in the field of human rights in criminal proceedings, as well as on important aspects of the constitutional protection of the right to entrepreneurial activity. In addition, they discussed the state of consideration of appeals of courts of general courts to the Plenum of the Supreme Court on the unconstitutionality of certain provisions of the laws of Ukraine.

Addressing the forum participants, the Head of the Court Secretariat Viktor Beschastnyi noted the importance of the event, as it takes place as part of the celebration of the 25th anniversary of the establishment of the Constitutional Court of Ukraine.

Vasyl Lemak focused the attention of potential subjects of the right to constitutional complaint on the requirement to substantiate allegations of unconstitutionality of the law of Ukraine (its separate provisions) indicating which of the human rights guaranteed by the Constitution of Ukraine has been violated. In particular, he stressed that these may be rights that are not necessarily enshrined in the constitutional text, but having an individual interest in protection against arbitrariness, a person must justify it so that the Court agrees that this interest is worthy of protection at the highest constitutional level.

At the same time, the speaker noted, it is the consideration of constitutional complaints by the Court and its decisions that will be an effective "catalyst" for the establishment of genuine public confidence in the Constitutional Court as an independent and authoritative institution.

Deputy Chairman of the Mariupol City Council on the activities of the executive bodies of the council Arkadiy Meshkov, Head of the Executive Committee, Professor of International Law of the Institute of International Relations, Taras Shevchenko National University of Kyiv, Corresponding Member of the National Academy of Legal Sciences of Ukraine Mykhaylo Buromenskyi, Expert of the Center for Political and Legal Reforms, guest lecturer at the Ukrainian Catholic University, Candidate of Law Oleksandr Marusiak, Head of the Department of General Theoretical Law and Public Law of the National University "Kyiv-Mohyla Academy", Corresponding Member of the National Academy of Legal Sciences of Ukraine Anatoliy Zayets, Head of the Department of Constitutional Law of the National Law University "Odesa Law Academy" Dmytro Terletskyi, Associate Professor of Department of Law and Law Enforcement of Khmelnytskyi Institute of Interregional Academy of Personnel Management, Chief Consultant of the Division of Legal Support of Consideration of Constitutional Complaints of the Legal Directorate of the Secretariat of the Constitutional Court of Ukraine Larysa Zhdankina, and Head of the Department of State and Legal Disciplines and Public Administration of Donetsk State University of Internal Affairs Olha Peresada also took part in the third and fourth panels of the forum.

Attention was drawn to the support of the Co-ordination Centre for Relocated Higher Educational Establishments, simplified procedure to enter universities for applicants from non-controlled territories, professional training for higher education staff, notably lawyers and law-enforcement officers, as well as guarantees to ensure social protection of human rights.

In conclusion, Head of the Secretariat of the Constitutional Court of Ukraine Viktor Beschastnyi thanked the co-organisers and all the participants of the forum. He noted that the activities within the framework of the forum were fruitful and meaningful, and expressed hope that the discussion of the topical issues and ways of the resolution is timely and useful.

National Project Specialist of the OSCE Project Co-ordinator in Ukraine Natalia Romanova thanked the Constitutional Court of Ukraine, the German Government, and the participants of the event. She noted that this forum is the example of synergy of the work of all partners since it is important that it was attended by the representatives of local bodies, higher education establishments, experts and academics. According to her, the issues raised during the forum were considered in a comprehensive way and took into account the interests of all parties and the discussion provided basis for further meetings. 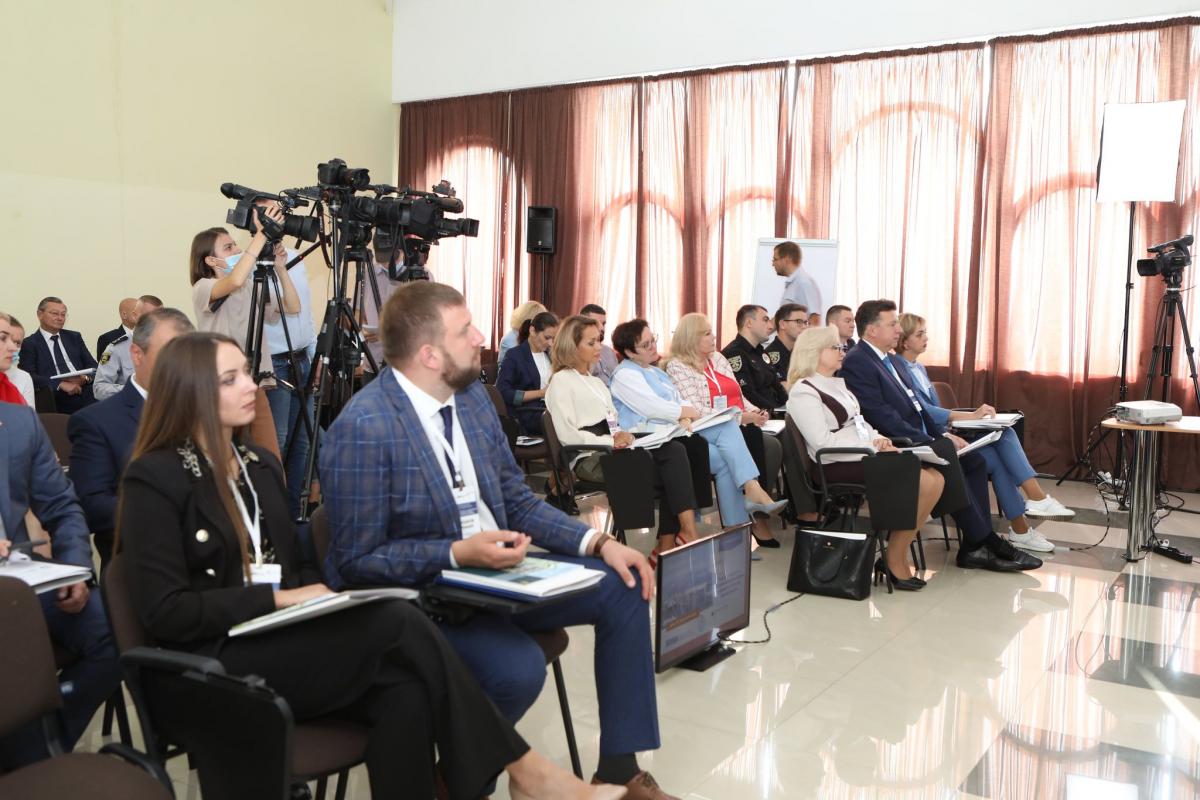 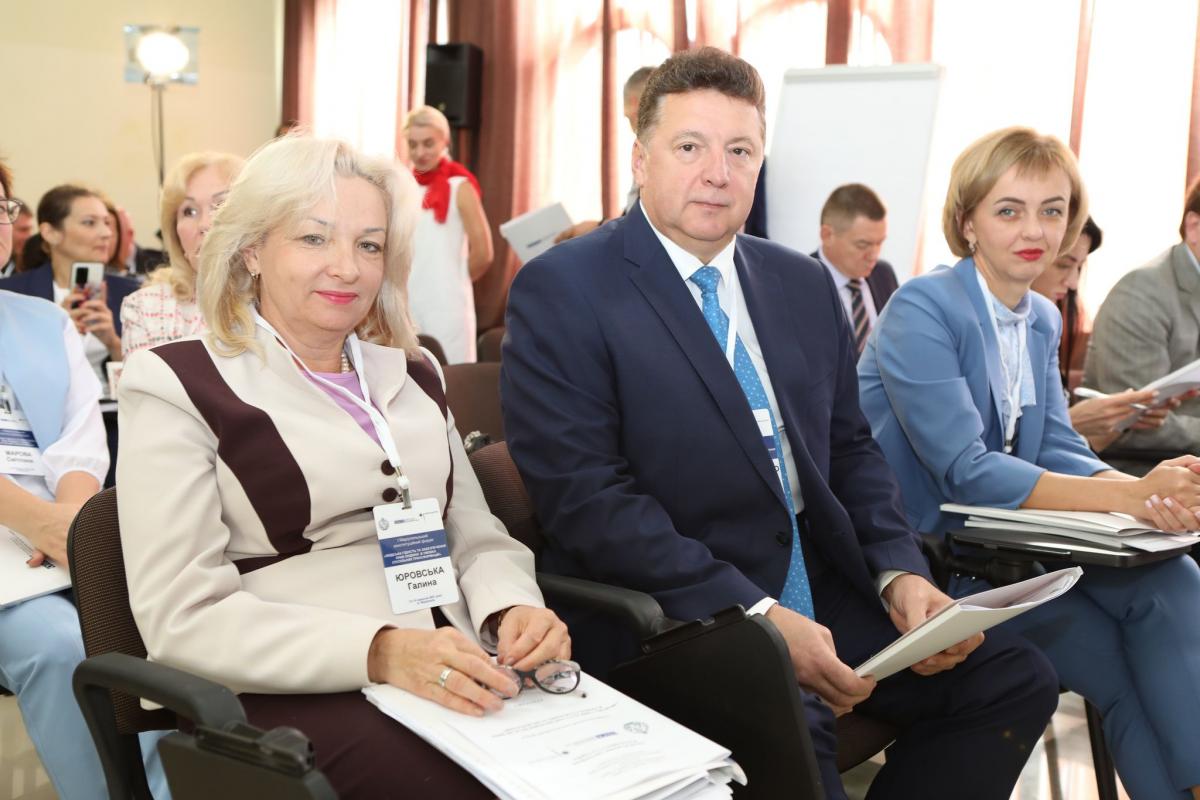 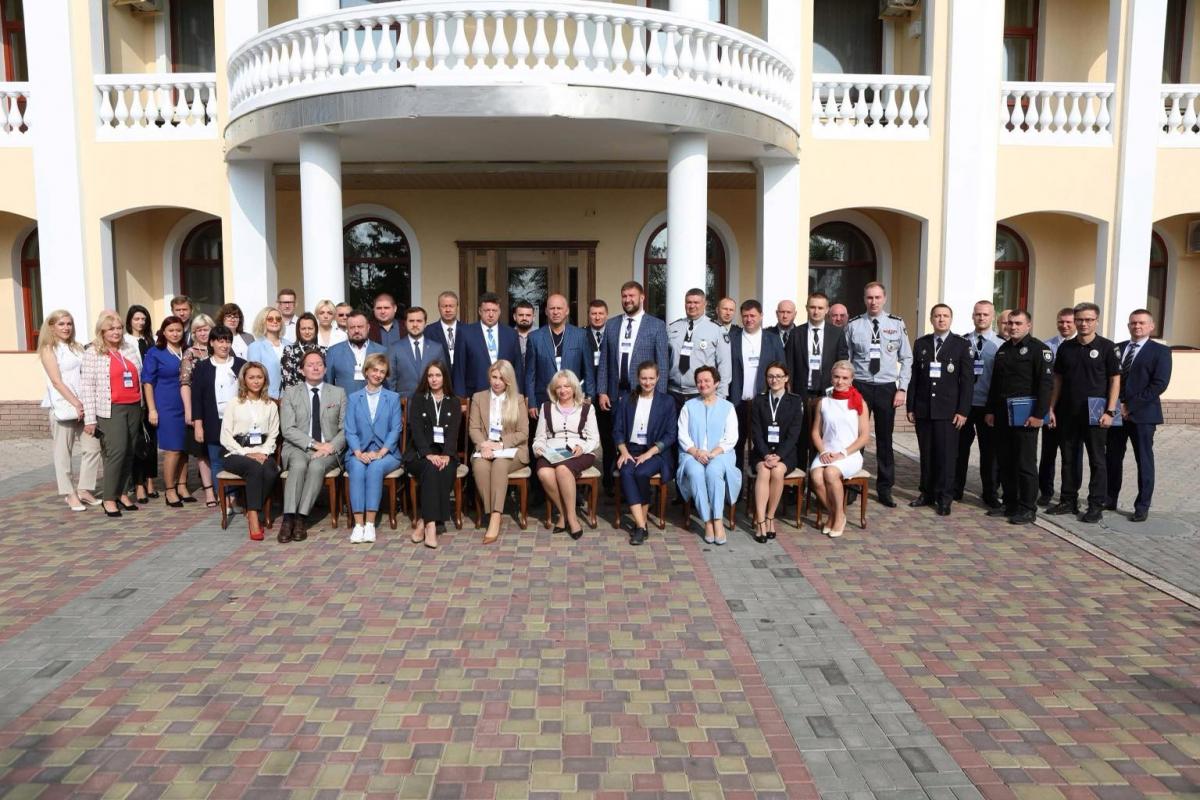